The Real County, Texas Department of Public Safety dispatch called Tavo’s Towing for a truck jackknifed off the road and down an embankment.

The dispatch call came in at 8:15 a.m. on Saturday, June 16, 2018, for a loaded dry van that ran off the road on Highway 83 north of Leakey, Texas. We dispatched a heavy-duty recovery team with a scene supervisor, two heavy-duty recovery units, a rollback wrecker with a skid-steer and a utility trailer with tools and equipment for recovery and environmental cleanup.

The recovery team drove 93 miles to the accident scene and arrived at 10:25 a.m.

Once at the scene, they analyzed the situation and started rigging for the recovery. The plan was to stage the Century 9055 to the rear of the trailer to winch trailer straight back with both winch lines doubled up with snatch blocks. The Century 7035 would be perpendicular to the trailer to keep it from going over the embankment.

“We blocked off the road with traffic cones to divert traffic away from where our trucks were staged,” Tavo said. “After all rigging was in place, we began the recovery with the trailer coming out the way it went in. Unit 257 used its second winch line to assist in pulling tractor from the rear frame. We then rigged up frame line to driver side steer tire to un-jackknife the tractor and get it in line with trailer.”

When the trailer reached the 50-ton unit, they repositioned it further away from the embankment and continued the pull.

Unit 257 continued holding the trailer with a flat strap coming from (the) landing gear and over the trailer to keep it from going over. When trailer again reached Unit 317, we held it in place to allow Unit 257 to reposition further up the embankment to get a better angle and keep it from losing leverage.

The team asked the state trooper in charge of the scene to close the road to allow the Century 9055 to go across the road for final pull that would get the truck and trailer to the side of the road.

The 7035 also hauled the truck and trailer back to their storage facility. 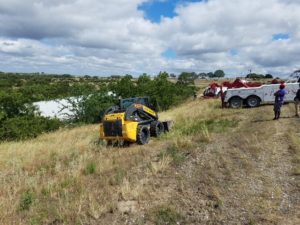 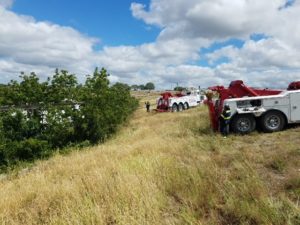 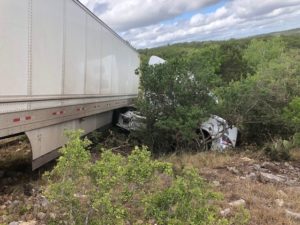 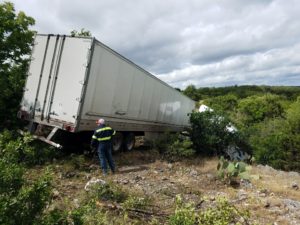 Get Your Free Quarterly Market Reports!

Stay ahead of the current SE Tennessee market trends with our Quarterly Market Reports. Sign up now, they're FREE!

Don't risk your money on a property that doesn't meet these 10 criteria! Fill out this form and we'll deliver it instantly!